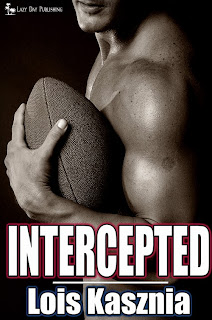 In honor of the biggest day in the NFL, I chose Intercepted to represent my theme today! (Even though hockey season is going strong!)

I have not had the best of weeks….Monday morning, I opened the door to get the morning paper and didn’t think anything of it. Sat down to read the paper, came upstairs to my work out room and started. The next thing I hear is a ‘LLLOOOIIISSS! There’s a bird in the house!” Huh? I ran downstairs and lo and behold, there’s a sparrow soaring around downstairs. We have very high ceilings and this little dinosaur loved it. Finally, we were able to coax it out the open front door.

Now, I’m wide awake! Finished working out and headed to the library to write. I did! I wrote about ten pages. I felt accomplished! Got home and went to get my cell phone out of my purse…where is it? I have no clue! I didn’t use it at the library so where is it? I drove back to the library and no one had turned it in. I came home and used my daughter’s cell phone to ‘Find my Phone’. It showed it was home but it wasn’t where I could find it.

I called Verizon and they suspended service for 24 hours while I searched for it. I don’t like losing things, so I became obsessed, to put it nicely. I couldn’t even eat, I was so worried. My daughter with a calm I haven’t seen in a while, went into my car and found the phone. It was underneath the passenger seat, in the back. I always put my purse behind the driver’s seat. Apparently, when I threw it in, the phone went flying out and lodged there. Last place I would’ve thought to look for it. Whew!

On Thursday, I went out to get the paper and when I came in and sorted it by sections, I noticed bird feathers all over my counter tops. Not again! I got my husband, who was only in his shorts, and sure enough there was another bird flying all over the house. Jim grabbed an umbrella (like Sean Connery in the Indiana Jones movie) and flapped it, forcing the bird to come back downstairs. I held the door open and the bird flies out when another one flies in. Aughh! Twenty minutes later, we were bird free. Jim was late for work and I began to scrub the house clean. The birds pooped over the carpet, the walls, the windows, the drapes, it was a mess!

I have a ‘between season’ season wreath on the front door which has a big bow. The sparrows had built a nest in the bow which is why they kept flying into the house when disturbed. Needless to say, the wreath is off the door and hanging outside on the fence, airing out.

So, I read the supersitions of birds in the house and it freaked me out. It says that death is near by. I don’t want to hear that! I’ve lit candles to ward off any evil spirits.

Friday was a quiet day and I was able to write more with a clean house free of birds!